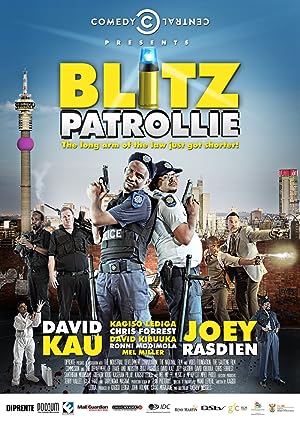 “Blitzpatrollie” chronicles the adventures of Rummy Augustine (Joey Rasdien) and his partner, Ace Dikolobe (David Kau), police officers who have had the misfortune of being stationed in a little known depot in the belly of the Johannesburg CBD. Rummy is bogged down with trying to start a family and an overbearing mother-in-law who just won’t move out. The overzealous Ace, on the other hand, can think of nothing better to do in the morning than to put on his “lucky” bulletproof vest and head out to kick some bad guy ass. Whilst in a poor white neighborhood, trying to solve yet another small-time crime, Rummy and Ace, along with their inept sniper colleagues, accidentally stumble upon a massive drug haul. What ensues is a series of mishaps as the duo encounters some of the city’s craftiest crooks in a race against time to catch the bad guys and claim their place in crime-fighting glory.